“Brain on Fire: My Month of Madness” Book Review

“We are, in the end, a sum of our parts, and when the body fails, all the virtues we hold dear go with it.”

Susannah Cahalan, “Brain on Fire: My Month of Madness”

Brain on Fire: My Month of Madness is a somber and striking look at the real life story of Susannah Cahalan. I was also recently told that it has been made into a movie that is available on Netflix, I had no idea! I have not seen the movie, but as we all know, the book is always better.

This story is told by Cahalan herself and it comes from a sincere, raw and tender part of her heart. Cahalan was a striving and successful twenty four year old female living independently in New York City, she had multiple friends and a newly blooming romantic relationship in the works, until her world began crashing down around her. She wakes up in a hospital and is unable to recall what landed her there, she is loosing her mind. Literally. She believes at times that she is being “rational” in her decision making, but she is not and her loved ones see her personality slowly changing.

Cahalan’s story takes us into a thorough look at neuro disorders and how often people can be misdiagnosed, as was the case with Cahalan. But if not schizophrenia, autism, or a parasite taking over her mind, then what is causing her brain to deteriorate? What was causing her to loose her personality and become a less attentive, personable Susannah? The journey to the discovery of this rare and exceptional disease is intricate and enlightening, Cahalan is honest with the personal struggles she faced and her loved ones had to endure. “Brain on Fire: My Month of Madness” is an intimate story of a young woman fighting for her life physically, while still trying to maintain her personal essence. 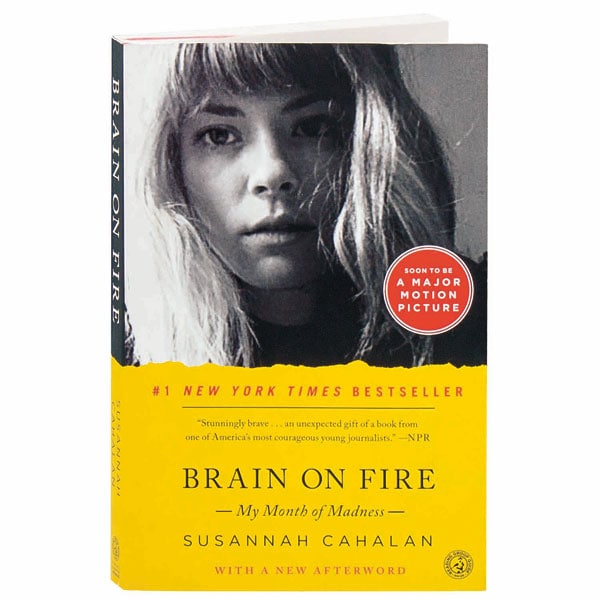 Why I Loved This Book

While not one of my favourite novels, I do recognize that it is becoming increasingly popular so I will give my honest review. It does highlight many issues with the medical system in the USA, which as a Canadian has been quite eye opening for me. This is the basic equation of medical care in the USA, from what I understand from this book and some previous knowledge.

One thing I will give Cahalan credit for is that she does an exceptional job of explaining all of the medical terminology she uses in the book to describe her state of madness. I have little to no medical terminology understanding, and I found her explanations easy to follow.

“The brain is a monstrous, beautiful mess.”

My issue with this novel is that Cahalan writes with a rather entitled tone, I do understand that her life is literally falling apart and she has more problems than I can count, but I could not get over the spoiled attitude she has. As stated before, in the USA if you have money than you can afford to find, treat and cure illness. Where as if you do not have money, then you are likely to end up with a common diagnoses a doctor can label you, be put into a group home or institution, or in more serious cases people die because they simply cannot afford the treatment they need. Susannah Cahalan comes from a well-off family and was able to purchase the best care and best medical advances money can buy, yet she does not point out that this is not common for the average American.

I will just leave this saying I wish it was more relatable, more on a common level rather so that people understand that her hard-working doctors and medical support team are not there for all Americans in the same way they were there for her. Maybe this is just me being judgemental, take it or leave it.

What I Learned From This Book

As noted above, I learned a great deal in regards to science of the brain and body. The brain is a marvellous, and dangerous thing as in the case of Susannah Cahalan. She made it easy to follow so I actually put down this book reflecting upon the science she shared, and in her true journalist fashion, she documents all of her sources well and simplifies it for her readers.

I am also more aware now that there are likely many people in the world who have the label of “schizophrenia”, “autistic” or “mentally-delayed”, when in fact they may have a more rare disorder. This novel truly opened my eyes to the advances that are continually on going in the medical community and how extremely thankful I am that there is such research happening in the world.

*I created a little playlist for this book, it’s more of a relaxed soundtrack but it does follow the journey of Susannah Cahalan’s life, check it out!

Good Afternoon, my loves! I am Camille, a twenty-something blogger who loves books, music, travel and life in general! You can always find me  Read more